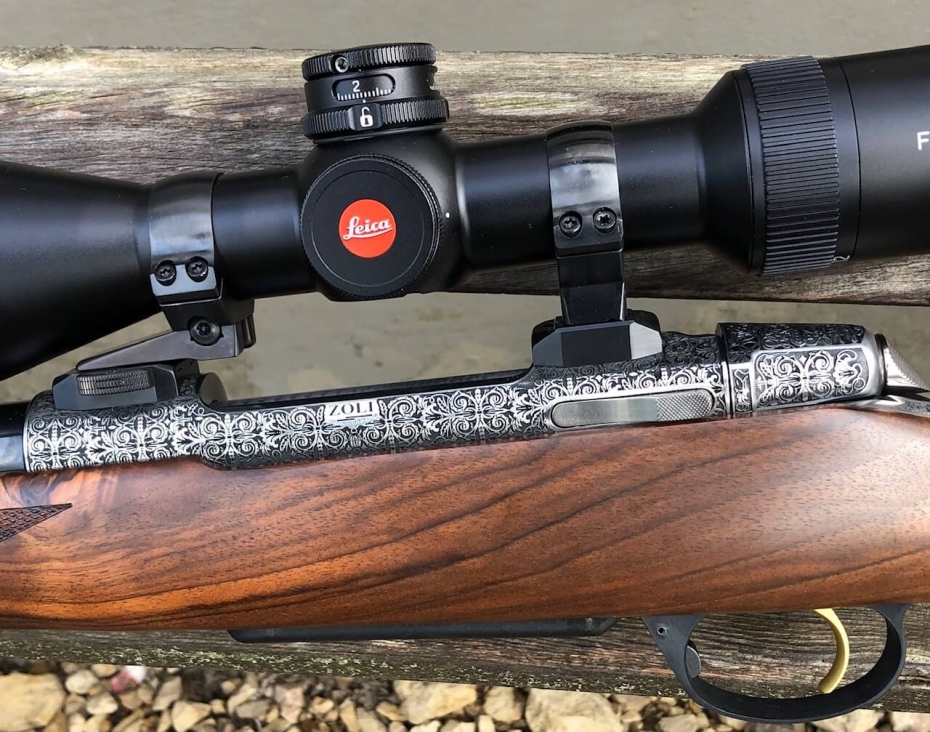 In search of a new, second bolt action, I had decided on the bolt action rifle Evolution Luxus  caliber 7×64 by Antonio Zoli. It should complement my good old Custom Mauser 98 in 9.3×62, which has accompanied me faithfully for many years everywhere I have hunted, and be used as a rifle for high seated hunting.

With my hunting rifles I deliberately prefer a classic appearance – I personally do not want to follow the current trend of giving hunting rifles a rather martial “tactical” appearance. Thumb hole stocks, plastic components, silencers, matte surfaces, short thick barrels or weaver rails may offer practical advantages for some hunters, but I would like to do without them. What is important to me, on the other hand, is an ergonomically straight hunting stock made of good quality wood, a solidly manufactured all-steel system, an easy-to-operate – sufficiently long – bolt handle s, a clean, quietly operating bolt action and good trigger as well as convincing precision.

All this is present in the bolt action rifle Evolution Luxus by Antonio Zoli.

The task now was to find a suitable scope. My future riflescope should match the classic design of my rifle as well as convince with its optical performance. The variety of riflescopes on offer  nowadays is enormous.

However, if you have a certain demand on the exterior of your riflescope, the possibilities are already reduced. For me, the scope must not look like a strange object on my rifle, it must fit the lines of the gun and should not be oversized. For me it is not compatible with the design of a classic hunting rifle, if riflescopes  have extra bulges and switches visible on the eyepiece for the illuminated dot technique. I prefer this integrated inconspicuously in the side adjustment turret.

According to these criteria, I was interested in the Leica Fortis 6 2-12 x 50i from the very beginning. From my experience with Leica photographic products I appreciate Leica as a manufacturer of high quality optics. I already own two binoculars from Leica – And last but not least the Fortis was quite new on the market just now. From the outside, it did not quite meet my expectations – the oversized and red Leica dot made of plastic on the adjustment tower bothers me and the matt-gloss surface of the glass does not really match the barrel surface of my  rifle – but the overall impression is right.

In the mid-nineties I bought a Leica BA 8×32 for day hunting and in the 2000s an Ultravid 8×50. Both lenses are still wonderful and on a very good level. However, in direct comparison to their current successors, I can clearly see the progress that has been made in the development of optics over the past decades. The current modern lenses provide a sharper, three-dimensional image, whereby the sharpness of individual image details can be wonderfully selected.

Therefore, when I ordered the Fortis, I had a certain tense expectation regarding an improved imaging performance. After delivery of the Fortis, I immediately clamped it on a tripod for an appropriate examination. During the first inspection I noticed immediately: The Fortis delivers a very bright and very sharp image.So my expectations were not disappointed. I was very curious to see how it would perform on the rifle during the aiming process and wanted to have the glass mounted on the rifle as soon as possible. 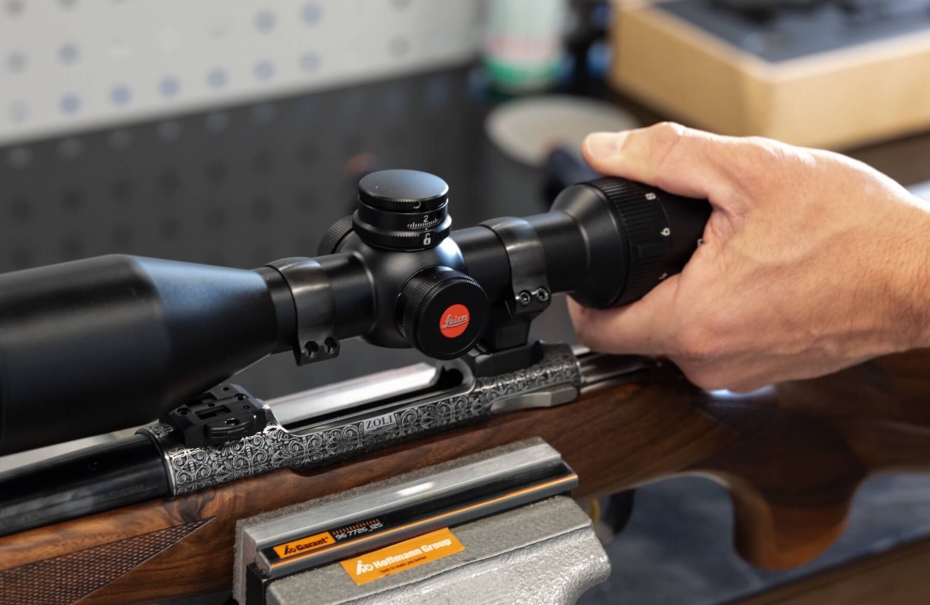 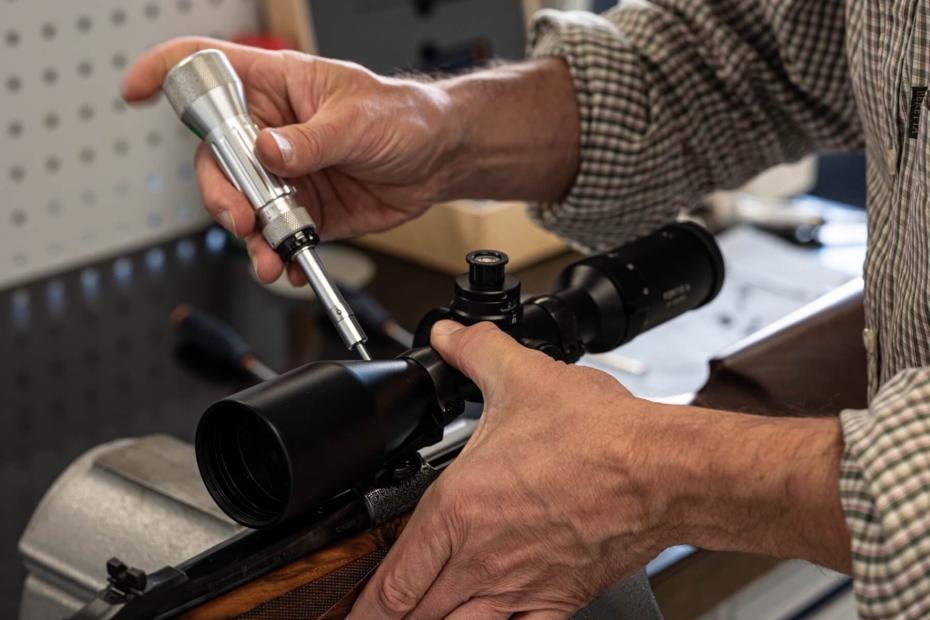 For the overall appearance of a rifle with mounted scope, the way of mounting is crucial, I don’t like rough stuff or nested components at this point. A riflescope must virtually float on the weapon, the mounting should not be visually obtrusive. I personally like a glass without rail with rings mounted on a classic bolt action rifle best. This allows a low profile and looks much more elegant than a scope with rail, which is why I ordered the Fortis without rail and not the version with Z rail. From my professional practice on the shooting range I know various mounts – my personal favourite is the contra claw mount of Ziegler precision parts. Its design is elegant, it can be mounted with a reliable result thanks to its completely prefabricated components, it can be operated with one hand when putting the glass on and off, it is shockproof and has a fantastic repeatability. With costs of 600-800€ this assembly is not necessarily something for cheapskates, but due to its characteristics it is worth the money to me. 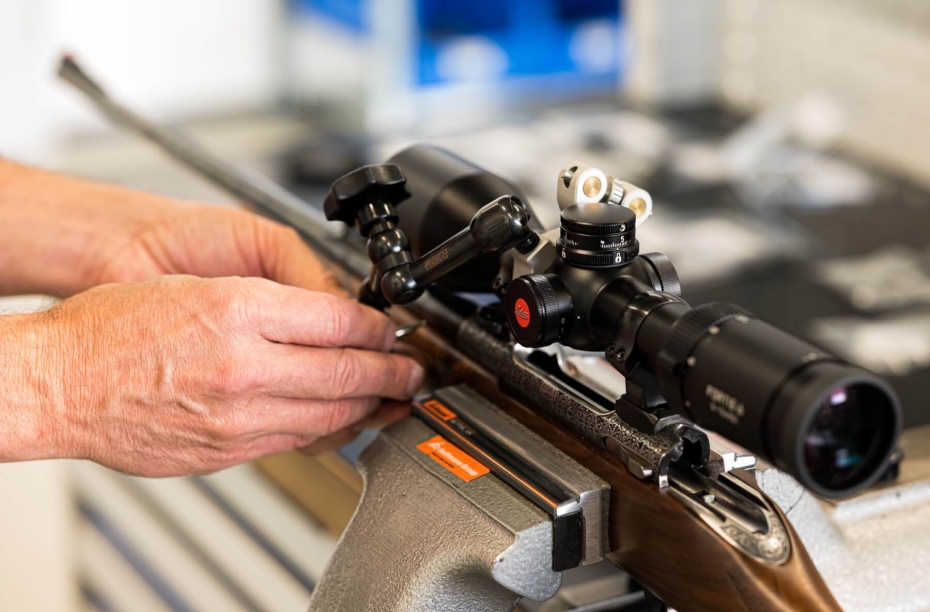 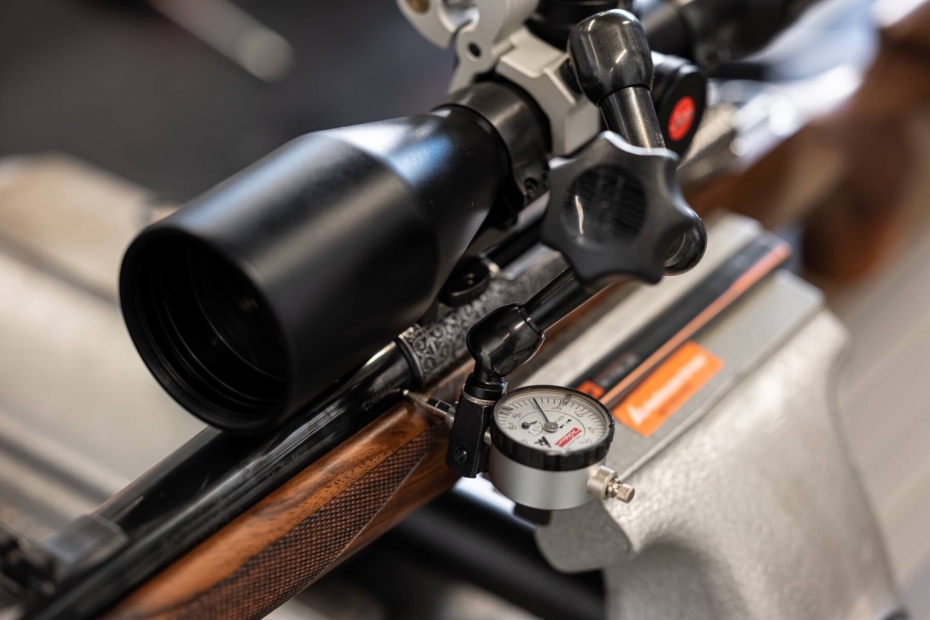 Although I had already installed the Ziegler claw mount on various rifles myself in the past, in this case I preferred to leave the assembly to the experienced gunsmith Johann Butzer, because I personally had no experience  assembling the cranked front foot necessary here and so its professional installation seemed a bit too tricky for me. Unfortunately, Leica does not give the complete dimensions of the tube geometry anywhere except for the overall length and tube diameter – so you have to measure them in detail. This makes it a bit more difficult to order assembly parts like the forefoot when it comes to determining the crank length. Fortunately, however, J. Butzer had the right component to hand. The assembly is simple due to the prefabricated components by Ziegler. Ziegler supplies a centering pin to optimally align the claws in the closing front base of the contra base. All screws are evenly tightened crosswise with a torque screwdriver. Using a dial gauge and probe, it is possible to check after the assembly has been completed how large the offset of the scope body is in relation to the system sleeve of the bushing when opening the mount. Optimally mounted, it should not be more than 2/100th of a millimetre and should return to its original position when closed. 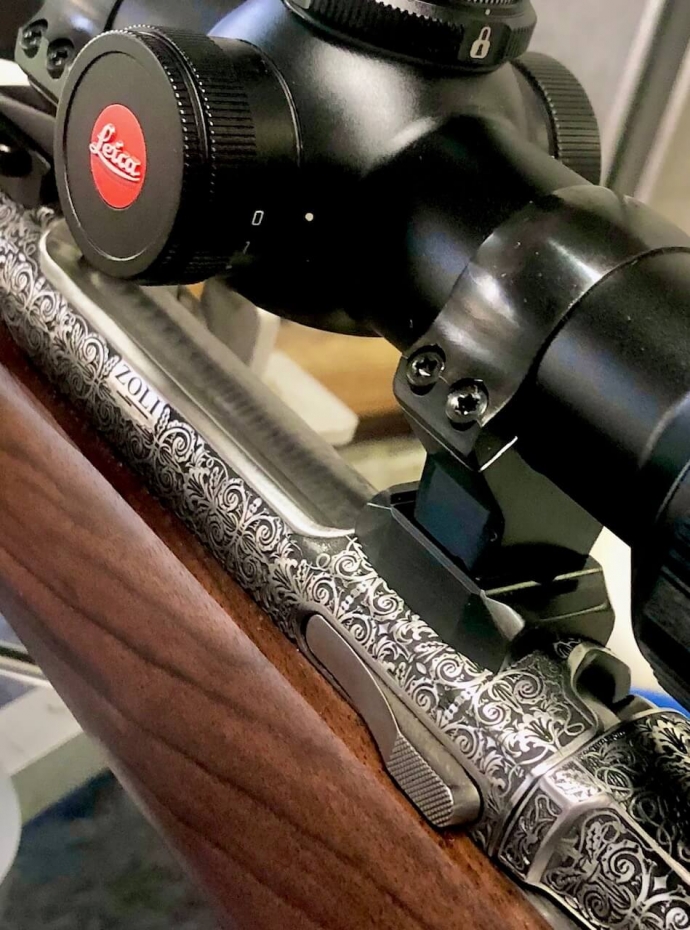 During our test the deflection of the hand was hardly visible. So everything is fine. 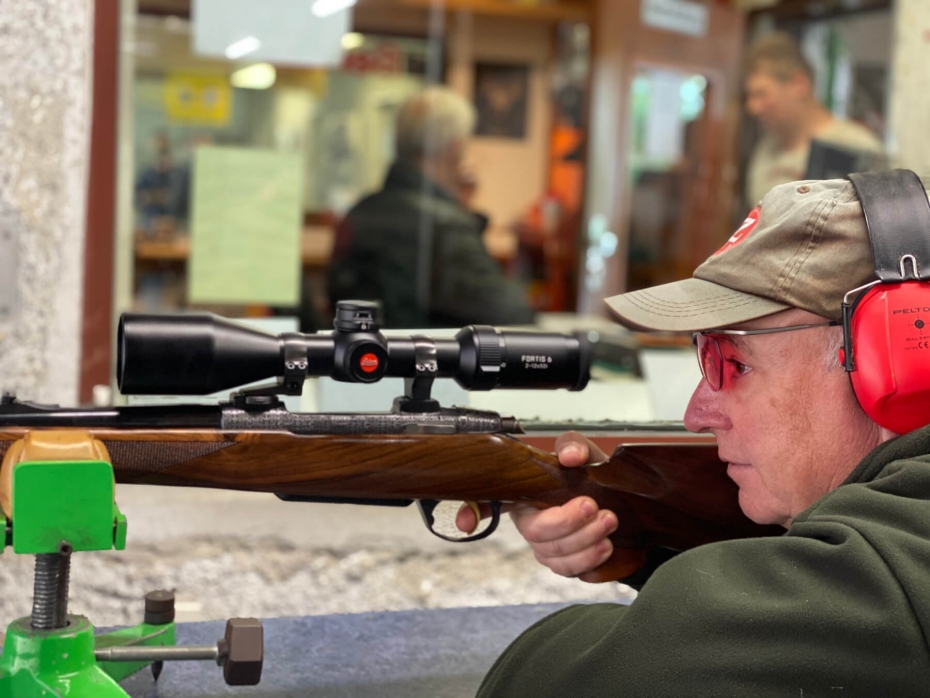 After assembly I had to go to the shooting range to shoot the rifle at least roughly. When aligning the rifle to the 100m target and the first concentrated looks through the mounted Leica Fortis, the bright and sharp imaging performance of this glass became really perceptible to me. The Fortis provides a very clear image across all magnifications, which is why observing and aiming with this glass creates a special feeling of security and, last but not least, is a pleasure. 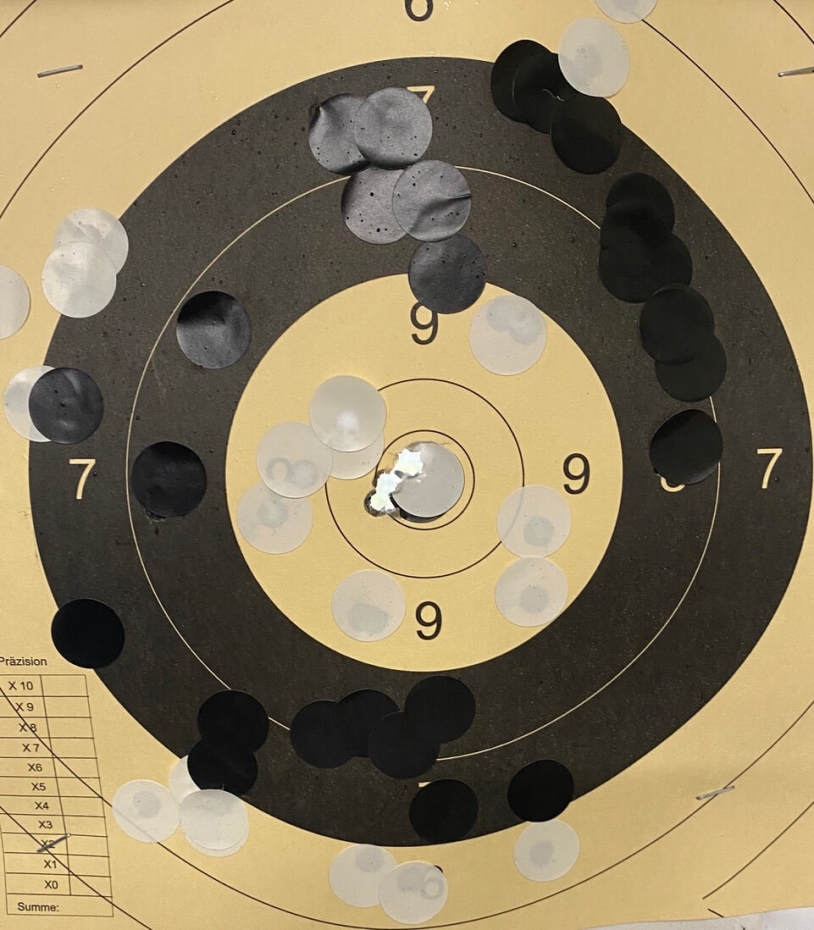 With new rifles I clean the barrel during the first 20 cartridges after each shot, in my experience this does improve the barrel precision. So it was in this  the case: After correctly setting up the reticle, I succeeded in the shot pattern shown – whereby I removed the scope before and after each shot and put it back on again.